Summary of the context and overall objectives of the project

The challenge of the dieper project was to apply advanced technologies for combustion and exhaust aftertreatment to existing non-hybrid Diesel engines and to optimize the improved characteristics of a new generation of engines referring to emissions, fuel consumption and driveability.
The passenger car development built on the baseline diesel engine 1.6 l Renault Espace MY2015. It introduced new technology concepts and followed a “rightsizing” strategy. The new combustion
system is the advancement of an approach introduced in the previous project REWARD. This new concept was combined with new high pressure optimized injection equipment (provided by partner CONTINENTAL), an optimized boosting (with single stage VTG turbocharger), high- and low pressure EGR systems and special devices for catalyst temperature control. These are a two-step water charge air cooler, an electric intake heater and an electrically heated DOC. One main issue for the calibration was to develop fuel efficient strategies for “rapid heat up” of the catalysts after cold start and “keep warm” during all kinds of vehicle operation.

The improvement of a Light Commercial Vehicle (LCV) is carried out based on the F1C engine and its subsystems from IVECO. The LCV demonstrator vehicle is an IVECO Daily. The comprehensive development includes a new combustion concept with advanced charging and EGR systems, loss reduction (engine friction and electrified auxiliaries) and an advanced temperature management.

Initial investigations showed that the fuel consumption can be reduced by up to 15% due to the global synergy between compression ratio, EGR rate and the fuel-air equivalence ratio. Based on
these investigations, combustion concepts have been laid out for passenger car and LCV engines. After experimental assessment on a single cylinder engine and projection on different driving cycles, the expected gains identified at the very beginning of the project are not confirmed. The highest efficiency gain was reached for the LCV application which resulted in figures between 0.7% and 2.6% improvement, depending in the driving cycle. No improvement has been reached with the passenger car application. All the theoretical thermodynamic advantage that VCR combustions system could offer is overcame by its critical capacity to reach the pollutant targets, particularly the NOx/Soot tradeoff. Besides of the thermodynamic topics modelling activities focused of the prediction of particle emissions.
Sub 23nm particle source analysis was carried out. PN measurements from dynamometer tests with the LCV baseline vehicle were made and analyzed. Low porosity substrates (for CSFs) and high porosity substrates (for SCRFs) have been selected to give a defined substrate for meeting best filtration, considering compromises with back pressure. Filtration efficiencies were investigated in detail also for special operating modes such as cold start and regeneration. All full size catalysts and filters were provided for both the demonstrator engines and lab size catalysts for lab investigations of ageing and robustness.

A new 2.0L Diesel engine for the RENAULT Espace was laid out and procured. This engine features a new air charging concept for improving the catalyst temperature management, a new fuel injection system (from partner CONTINENTAL) and advanced concepts for EGR and charging. Furthermore, a new aftertreament system has been laid out and an engine model has been developed which was used for extrapolation of the vehicle characteristics (calibration) to extreme environmental conditions (cold start, high altitude). The engine and aftertreatment system have been developed and calibrated on engine test bed. In the last project year, they have been installed in the demonstrator vehicle which initially was baseline tested with the MY2015 engine. After final calibration of the vehicle on the chassis dynamometer, the vehicle was delivered to partner ViF who managed its final independent testing. The targets were reached except a small exceedance of the CO2 in WLTC. One basic research topic investigated the use of thermal insulation coatings for specific engine components. After procurement of the Iveco Daily demonstrator vehicle it was intensively baselined, primarily with respect to its particle emissions. This was partly carried out in the labs of partners. The analysis and design tasks enabled the specification and procurement of the new components. Aftertreatment hardware screening on engine test-bed showed most promising results with eDOC+SCRF+SCR and PNA+SCRF+SCR.

Initially, the baseline vehicle was tested by partner ViF. In the second period the advanced engine and aftertreatment system were integrated to the vehicle and again delivered to ViF who managed the final assessment. All project targets were reached with this demonstrator vehicle. Development of calculation tools to determine the impact of the FIE on CO2 emissions, and to evaluate the deterioration of the EAS and its impact on pollutant emissions over useful vehicle life. Measurements of fuel injection systems were carried out on an advanced test rig. Various new catalysts were tested in the lab and their ageing characteristics have been determined. With the measured characteristics an engine model was correlated which was used to project the ageing and robustness characteristics (with respect of emissions and CO2) to the lifetime of vehicles. Measurements with the base-configuration of the demonstrator vehicles have been carried out and all
test procedures for the final assessment have been defined. Furthermore an LCA has been carried out which builds on the characteristics and final results achieved with of the demonstrator vehicles.

Progress beyond the state of the art, results until the end of the project and potential impacts

The dieper project emphasized product developments close to production. Thus, attention is given to approaches which will be applicable in short term. Various topics have been developed in different fields such as engine combustion concepts and aftertreatment systems and have been assessed in the complex environment of demonstrator vehicles. OEMs and suppliers will pursue various of the dieper developments to serious production. Even though individual topics such as e.g. the advanced calibration topics were specifically applied to the demonstrators, they define general approaches which are also applicable to other engines. Dieper is a logical and inevitable continuation of European R&D programmes on diesel engines for passenger cars. In succession of the project REWARD it expanded both the emissions and fuel consumption reductions to core areas of LCV and particularly contributed to the framework of sub 23 nm particles emissions with new technology for the reduction of sub 23 nm particles from diesel engines.

The dieper project shall contribute to counter detrimental effects of growing road transport on the environment and public health. Despite increasingly stringent emission standards CO2 and noxious emissions must be sufficiently reduced under all conditions in real driving. 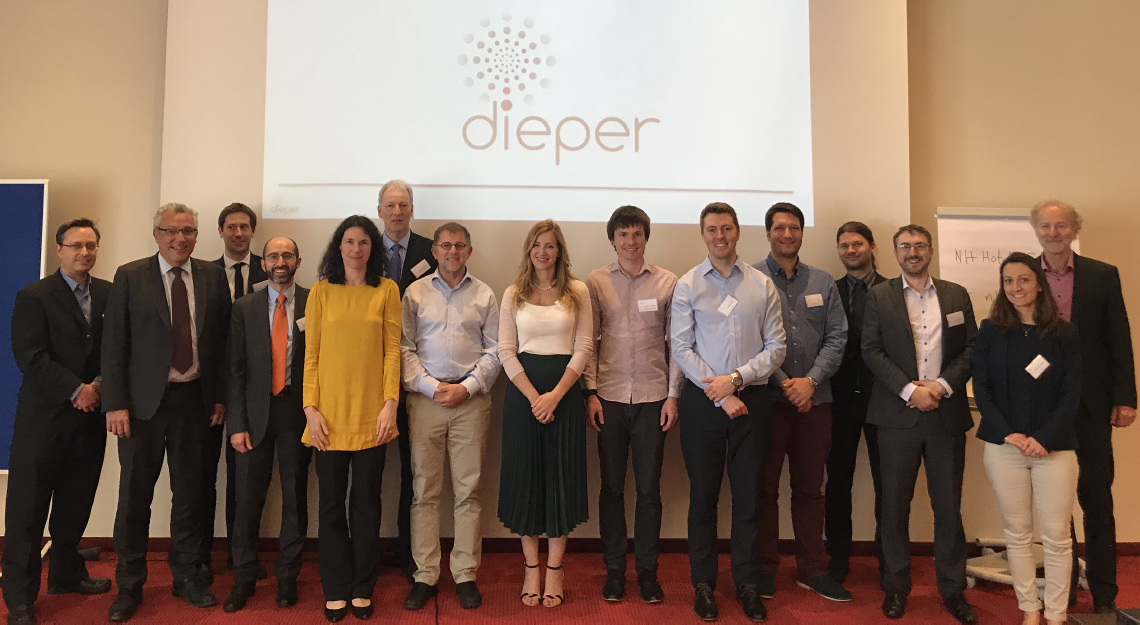